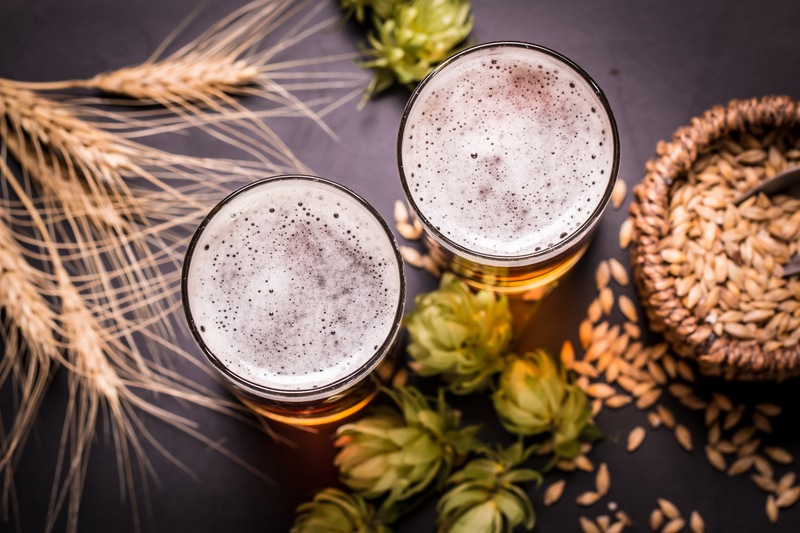 Love to explore and taste a variety of craft beers? Well, look no further! Asheville is recognized as a renowned craft beer mecca and boasts over 30 breweries. In fact, Asheville ranks among the cities with the most breweries per capita in the United States!

You can take a tasting tour, or you can choose a few that speak to you. However you decide to experience the Asheville beer scene, you won’t be let down by the culture and variety that this unique mountain town has to offer! Today, we’re exploring 10 of these local brewing spots and highlighting which beers have put them on the must-taste list of residents and visitors alike. Take a look!

With three awesome locations, the Asheville Brewing Company is a must-do. Their location in North Asheville features a theater offering the most affordable movie tickets in town—just $3 a person! Plus, they offer an old-fashioned game room perfect for the kids and of course plenty of fresh brews for the grown-ups. Their brewery production equipment is located at their downtown brewpub where you can get a taste of Asheville direct from the brew deck! At their South Asheville location, they serve delicious pizza to go along with their popular Fire Escape Pale Ale. With the perfect hint of spice, this aromatic brew is made with fresh, roasted Jalapeno peppers.

Residing in the South Slope District, Burial Beer Co. began as a one-barrel system back in the summer of 2013 and quickly to the successful taproom operation that it is today. They also offer a full-service kitchen with American comfort-style dishes to satisfy your after-hike cravings. At Burial Beer Co. you can enjoy a variety of brews, from Saisons to Stouts, while strolling the wraparound beer garden or relaxing with a Bolo Coconut Brown Ale at the Taproom bar. This brewery’s unique aesthetic is taking the beer scene by storm. In fact, they just opened a second location outside of Biltmore Village!

Named after the Hindu goddess of bees, this brewery features year-round seasonal and small-batch beers. Also boasting an eclectic menu of exciting cuisine, each dish is designed to pair perfectly with any one of their fresh brews. Try their hoppy Lorelai IPA or the Special Elk spiced Amber Lager and pair with their Spent Grain Pretzels or Tofu Chilaquiles.

Dubbed the “Craft Beer of the Carolinas”, the Catawba Brewing Company has two locations in Asheville—one in the South Slope District and another in Biltmore Village. As one of the first area breweries to offer beer in cans, Catawba beers have long been a popular choice in coolers for camping trips and fishing expeditions. Their signature year-round brew includes the famous Zombie White Ale which got its name from being introduced originally as a Halloween special.

Green Man Brewery is known as one of North Carolina’s original breweries and opened its Asheville taps in 1997. Offering three stories of tasting rooms, taprooms, and a “brewtique”, this classic spot won’t disappoint! Green Man is located in the South Slope District next to its own production facility. Here, you can enjoy a legendary Green Man Lager while overlooking breath-taking views of the Blue Ridge Mountains.

Family-owned since 1994, Asheville’s Original Brewery operation began entirely built of dairy equipment…that’s right! Today, they boast a capacity to brew over 60,000 barrels annually while still maintaining their local taste. At Highland, tours are offered 7 days a week and live music is a common occurrence in the tasting room! The brewery also includes a dog-friendly roof-top bar with mountain views, plus a tree-lined space for live music in the warmer months. Their malty, amber Gaelic Ale is one of the most popular taps in Asheville bars and restaurants. Needless to say, Highland Brewing Company is at the peak of the Asheville beer scene!

Known for producing balanced beers in the heart of Asheville, this brewery takes on a circus theme with its unique décor and sensational brews. Hi-Wire is dedicated to the tradition of craft brewing while striving to be innovative. Don’t take yourself too seriously as you enjoy the fun spirit at their downtown or Biltmore Village locations. Be sure to try out their flagship Lager, the Hi-Wire!

Perhaps one of the most well-known Asheville area breweries, New Belgium offers live music, beer-sampling, brewery tours, and more. With a company motto like, “In pursuit of great beer, not quarterly earnings”, you know you’re in for a treat! Their most famous brew, “Fat Tire” can be found at bars and restaurants throughout the United States. Every batch is brewed with high-quality, natural ingredients to create this well-known Belgian-Style Amber Ale.

In the heart of Asheville’s River Arts District, The Wedge is stationed in a warehouse that was originally the largest leather tannery in the United States. Today, you’ll marvel at the massive brewing tanks as you sip on a delicious Iron Rail IPA or try their Super Saison Farmhouse Ale. At the center of the Asheville art scene, The Wedge is a must-see for any brew-lover!

Last, but certainly not least, Wicked Weed Brewing is one of the most recognizable Southeast breweries. With their unique sour, barrel-aged beers, you’ll never run out of craft beers to try! Their latest addition in the South Slope District, “Funkatorium”, is the East Coast’s first sour and funky beer dedicated taproom. Their crafted beers are forward-thinking, ingredient-focused, and they love to push boundaries in their recipes. Step outside your craft beer comfort zone and try their Barrel-Aged French Toast brew!

Whether you make it to all ten or only have time to experience one Asheville brewery, we’re certain you will get a taste of the city’s unique culture. From hoppy IPAs to richly brewed Ales, you’re sure to find your favorite local spot. Just one of the many alluring reasons that Asheville, North Carolina is the perfect place to call home! Contact us today to learn more about Asheville living and how we can assist you in finding your next dream home.